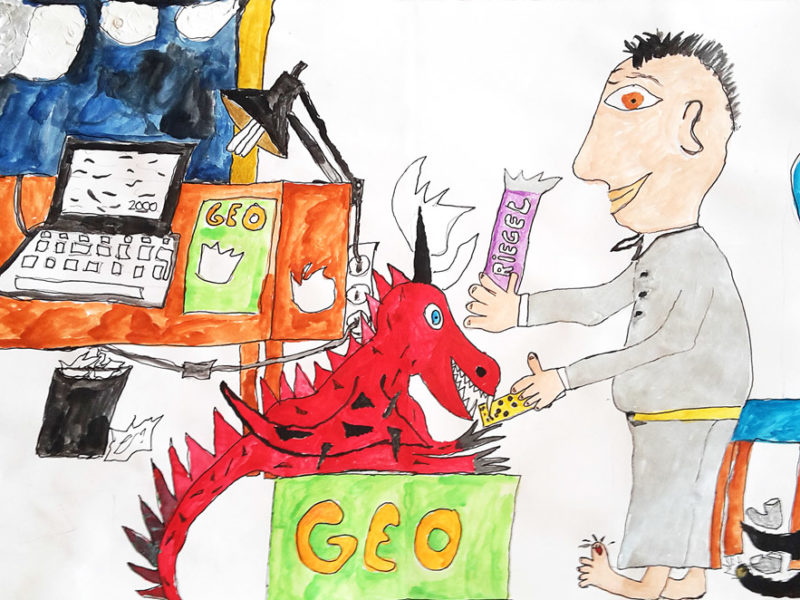 Here comes the link for the English ebook (2,99 special offer):

It had become late again. The chief editor had edited the article until deep into the night. Everything had to be done until the editorial deadline. Like always some reporters had turned in their story at the very last minute. Mr Raffel sighed profoundly: -How come that nobody has explained to that journalist that she is only to write about 2000 signs??!

Mr Raffel tussled once again his black short hair. He looked outside the window: His office was the only one that was still illuminated. His colleagues had long gone home. The chief editor looked at his face reflected in the window: He saw his deep eye rings.

–I really should look after myself better. Otherwise Mrs Timber can interview me about burnout soon.

Unsatisfied Mr Raffel looked at the article in front of him. It was only corrected halfway. Mr Raffel didn’t know what to cross out any more. The article was about a burnout-patient who had overcome her burnout by writing a healing fairy tale in a psychosomatic clinic.

–That the patient flees to a Buddhist sanctuary after her stay in the clinic also has to be eliminated completely!

The chief-editor looked at the calculated number of signs in his laptop and leaned back satisfied. –Exactly 1999 signs. I did it!, he said to himself. Suddenly he heard a rumbling noise and turned around:

But there was nobody there. –I am really overworked. Now my imagination is playing tricks on me, he said trying to calm himself. At that moment the light turned out. Mr Raffel sensed that the floor was vibrating under his feet. He heard a shrill whistling. Then there was a hiss. With trembling fingers Mr Raffel reached for the button of his architect’s lamp. But it didn’t help. His office stayed in the darkness. Soon his eyes adjusted to the darkness. The full moon appeared behind a cloud and illuminated the office with its silvery rays.

At that instant Mr Raffel saw something crouching on the floor. It was not bigger than a lizard. –Outsch!, shouted the chief-editor, jumped from his chair and touched his foot. Stunned he looked at the still smoking hole in this shoe. This was weird. But what was even more strange was the flame that burnt his other shoe.

Mr Raffel took off his burnt shoe and made a few steps backward, took off his shoe with the hole. His big digit stood out of the sock. When Mr Raffel touched it, he sensed that there were furrows. Suddenly he looked at his side and then he saw it:

The creature sat on a box with old magazine editions and looked curiously with its big blue eyes. When it opened his tiny mouth for another flame, Mr Raffel saw that it had red scales and black spines. He had a tiny dragon in front of him.

The dragon opened his wings that were no bigger than a bat’s and moved them excitedly. The chief-editor rubbed his eyes and sensed something hard: When he took it out he saw that it was a piece of an eggshell.

–Have you hatched lately?, he asked the red dragon stunned.

-What is your name, dragon?

-Fulna, and for your information, I am a lady dragon, the creature told him proudly.

–Well, Fulna, you can’t stay here, for my colleagues might see you.

-Bad luck for them, grunted the dragon lady.

–Maybe they will do you harm, threatened the chief-editor.

-You have to hide me someplace safe.

-Why should I do that?

-Because you are responsible for me now.

-What kind of greeting?

-Well, the imprint of my claws in your foot. You are my foster daddy until I am fully grown up.

-Hhm. And how long does this take?

-Until I am able to fly.

-You want me to teach you how to fly?!

-No. You only have to feed me, until it is my turn to fly away. By the way, what are you doing here?

-I am a chief-editor.

-What is a chief-editor?

-Well, I make a newspaper for humans.

-But a newspaper is nothing to eat. It is a message from humans to humans.

-And what are you doing with it?

-I read what some people have written, shorten it and rewrite it.

-Can you teach that to me?

-You would have to learn how to read and write.

-Fantastic! Can you teach me that as well?, asked the dragonlady and her eyes shone with happiness.

-I don’t have even enough time for myself with all the work I am doing. How should I find time to care for a dragon, then?

-You have to find time for me. You are wearing my sign.

-I am overworked. Maybe I am imagining this all. I am going home now.

-Hey, you can’t leave me here. And I am no imagination, look at your digit!

-That’s enough! I am leaving.

-Tell me, what is your name?

-Well, Bjoern, what I told you about the sign is the truth.

-I could take you to the zoo, where you can be with the other animals.

-Other animals?! I am a dragonlady and I belong to the human who wears my sign. You are to teach me everything that you know of. This reading thing.

-But if my colleagues will see you they will take you to the zoo.

-You have to hide me in a secret place. You can also bring the rats and bats there.

-Rats and bats? Where should I take them from?

-Well, you are big enough to catch them for me!

-Then show me where I can sleep. Or I will live at your home“

-Never ever! You can sleep in the broom closet. It is opened rarely and only by the cleaning women. If they open the door you have to hide, got it?

-I will go to the pet shop tomorrow, said the chief-editor with a sigh.

-But I am hungry now.

-You have to put it in front of my mouth. I can’t fly yet, Fulna complained.

-You are right. You have hatched only lately.

-Don’t make fun of me!, cried the dragonlady. But at that moment Mr Raffel brought the bar of chocalate in front of Fulna’s mouth. It was the first contact between human and dragon.

In 2017 the autobiographical novel “Renate or the journey to the centre of the self” will be published. It contains an integrated healing fairy tale that is based on Fulna’s story. 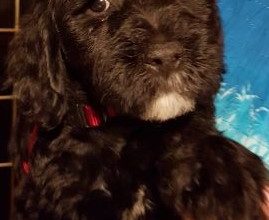 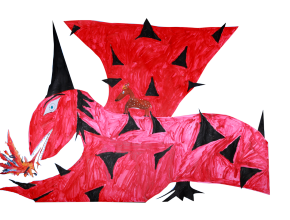